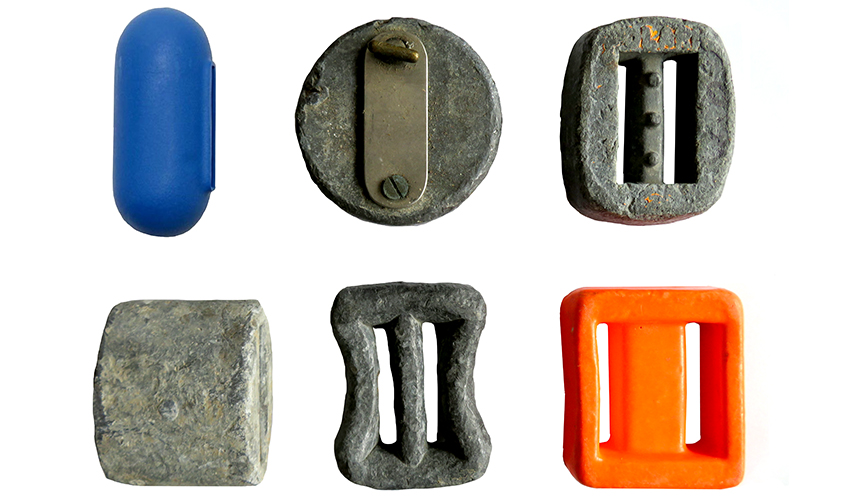 Sport divers dive with some of these. Do you know what they are?  Choose an answer below –

They are weights. Divers need to wear weights to help them sink under water. Believe it or not, it is harder for a diver to sink than to float. Weights can be worn on a waist belt, in pockets, in pouches around ankles and even around the neck.

What do you think they are made of?

Plastic is not really heavy enough. But to be fair, some are covered in brightly coloured plastic.

Although ancient divers DID use stones to weigh them down when they went diving.

Because lead is so dense, heavy weights can be made in a small, easy to carry form. Weights are sometimes covered with plastic to protect the lead from corrosion. It also helps to stop the lead wearing holes in wetsuits by rubbing against the material.

WHY DO DIVERS WEAR WEIGHTS?

You would think that divers sink easily but actually it is harder to sink than float. Strange but true!

When a sport diver is fully dressed and ready to dive, he or she is wearing an outfit that weighs approximately 32-34 kg.  This is a very rough estimate.

A steel cylinder full of breathing gas weighs about 14kg, a wetsuit (that is 7mm thick) weighs about 3.5 kg, the regulator, mask and fins weigh about 7 kg and then the diver has to wear diving weights according to that person’s individual body shape and weight. So an average adult man might wear about 10 kg of extra weight and an average adult woman might have a 9kg weight belt – it varies for everyone.

So with all that weight, why doesn’t a diver just sink to the bottom as soon as he (or she) dives into the water?

Well that’s because there is gas in the diver’s body (especially the lungs), in the cylinder and in the neoprene that the wetsuit is made from (neoprene is a kind of rubber that is full of holes  – a bit like an Aero chocolate bar).  Imagine having to take a balloon underwater. The air in the balloon makes it want to float; so to take it under water you need to add weight to make it heavy enough to sink.

Old fashioned standard-dress divers (the divers who wear those big copper helmets) carry even more weight than a sport diver. The helmet, suit, boots and chest weights weigh about 86kg altogether. There is a lot of air in the helmet and in the diving suit. You need a lot of weight to compensate for that volume of air to make the diver get under water.

Just like a sport diver, the standard diver can control his buoyancy underwater by using a valve on the diving helmet. If he opens the valve air will escape out of the suit into the water and he will get a little heavier; if he closes the valve, the air will start filling his suit and he will get more buoyant. 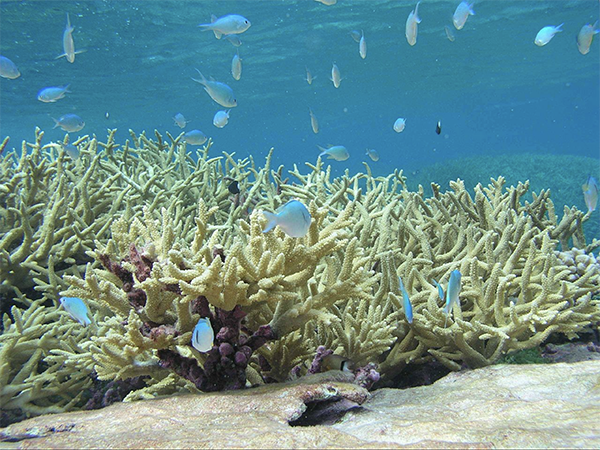 What do you call an atoll that sings?

A choral reef, of course!

If you con’t believe me, read this article about singing coral  …

Here is a short clip from a 1960 film called ‘The Bulldog Breed’ which makes fun of what can happen if a diver gets too much air in his suit. Of course it is exaggerated to make it funny, but it is true that even a heavy standard-dress diver can float to the surface if his suit gets too full of air.

4 divers … sunken treasure … and an incredible challenge.
Kaz, Dante, Adriana, and Star aren’t the best divers in the world, but they’ve been chosen to spend the summer exploring the depths of the sea. There are only a few problems. First, the killer sharks. And then the fact that the people running the programme are hiding something big … and mysterious. These four kids are about to make the discovery of their lives … and put themselves in danger because of it.

In ‘The Discovery’, they explore an underwater habitat that’s just been altered by a seismic event. What they find, though, is much more than fish – it’s sunken treasure. Can they salvage it without anyone else getting to it first? Will the prospect of wealth set them against one another? And what about those sharks . . . .

In ‘The Deep’ they discover a sunken treasure ship, but someone doesn’t want them to get near it. It will take ingenuity and teamwork for the kids to get back what is rightfully theirs.

And in the final book in the series, ‘The Danger’, they find sunken treasure. The adults want to keep it for themselves. But there’s a chance that both will lose it if they don’t act fast.